There are moments in a homeowner’s life when they panic, and none are more terrifying than a toilet leaking. The general homeowner is thrown into a whirlwind of confusion and uncertainty because they understand this mean serious business. There are a number of issues at play here, and one of these issues happens to be that most homeowners, especially first-timers, are not quite sure how to approach bathroom/plumbing repair.

It also stands to reason that when most people hear the word ‘leak’, they are convinced that there is nothing less than worst-case scenario rules in place. While it may not be such a dire situation, though, it is still important to know that when confronted with a leaky toilet, you need to take action.

Here are five reasons why taking care of that toilet leak is vital:

1. Saving Money – While money may be low on your list of priorities when it comes to a leaky toilet, it is important to keep in mind because wasting money can work in a few ways. Not only will you waste money with water leaking (higher utility bill), you also stand to have to spend a pretty penny when if the damage your leak causes is major.

2. Damage – Speaking of damage, most home experts agree that homeowners should think of a leaking toilet as a source of flood damage. In one instance, water damage can happen over time even with a small amount of water. Moreover, if the leak is based in damage to the porcelain of the toilet, it means that the porcelain has been compromised, leading to major failure at some point (and water everywhere).

3. Sewer Gas – One issue many people don’t think about is sewer gas in your bathroom. There may not be water present. However, you may notice the sewer smell, and this is a problem. We are inclined to think that unless water is present, it can’t be defined as a leak. Also, because it’s the bathroom, we assume that a smell is part of the territory.

4. Environmental Concerns – When it comes to environmental issues, it bears mentioning simply because of how much water is wasted by a leaky toilet. Some home experts estimate that a leaking toilet can waste nearly five gallons a minute. If the area when you live is under water restrictions due to drought conditions, you’re causing a major problem.

5. Resale Value – One last note on toilet leaks deals with the resale value of your home. Nothing deters a prospective home buyer than a leak of some kind. By addressing a leak quickly, you can save yourself a possible headache down the line.

Don’t let a toilet leaking ruin your day. By being vigilant and acting quickly, you can diffuse what could be a major repair issue with a relatively quick fix. 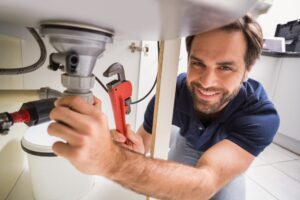 DigitalBuddy
2021-12-092022-06-27
We all must keep a checklist of home maintenance work that must be done periodically. This holds true especially for...